Now, you may be wondering (if familiar with Mexico’s geography), why we have suddenly found our way to San Cristobal in Chiapas state, and missed Mexico City and Oaxaca. Unfortunately, these areas had recently been affected by earthquakes (Mexico City as recent as the week before). While we were very keen to visit these areas (and had planned to do so), we decided to skip it, give the areas time to get things back together, and possibly circle back at the end of our trip.

From Morelia we took a bus to Mexico City, where we stayed a night in order to catch an early morning flight to San Cristobal. This flight is fairly popular and quite affordable if you don’t fancy the 15 hour bus ride, however we did not budget for this flight, so certainly cut into our expenses. If anyone is interested, we stayed at Chill Hostel in Mexico City. While friendly and cheap, it was a bit of a shambles, and very dirty, so perhaps look elsewhere (we know we will if we return).

Anyway, we arrived in San Cristobal, and headed to our accommodation, Rossco Backpackers. This place was a steal, and I can highly recommend staying here if you don’t have to pay the full rate (we paid half and it was the best value stay of our trip thus far). There is a basic breakfast included, a nice kitchen, a little garden, and they crank a bonfire up in the evenings so you can chill out and socialise with others. It’s also relatively central, so add it to the shortlist.

It’s pretty easy to see why San Cristobal is so highly regarded among the tourist and backpacker scene. It is a beautiful little town set in a picturesque valley, and sits at about 2500m above sea level. The Main Street is super-lively and closed off to traffic, and there is a ridiculous array of coffee shops, gourmet food and boutiques. 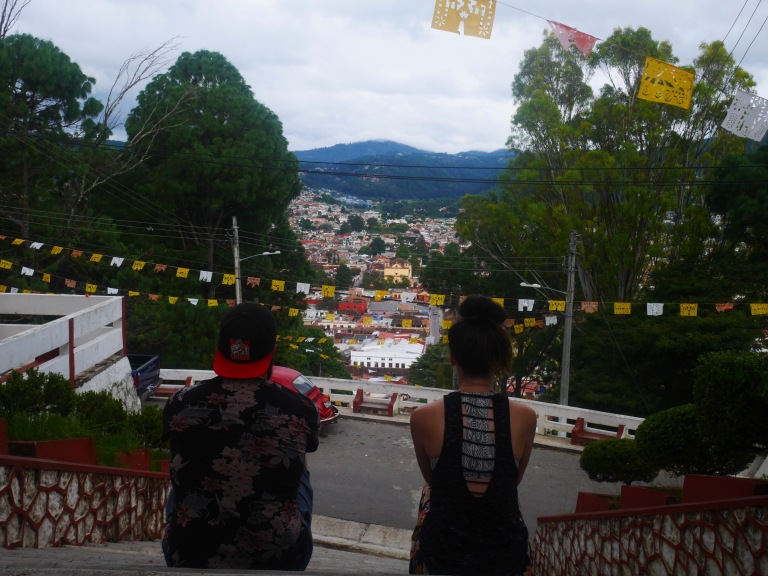 There are also two lookouts at either end of town, where you can get some great views. We basically just spent our first day meandering the streets, sampling foods and grabbing a few coffees. Jonny found a great taco cart, and religiously returned at meal times to feed himself for only $2USD! It also helped there was a crepe guy right next door – perfect for Alex. In terms of things to do here though, your options are pretty limited, and you’ll quickly find yourself eyeing up day trips to some local sights around the town.

Jonny had read about a national park with a number of lakes down by the Guatemalan border; Lagos de Montebello. We were able to book a shuttle tour for a mere $15USD each, and it also included a waterfall visit; El Chiflon. The tour took us to El Chiflon first, which is about two hours in the shuttle. While the magnitude of the waterfall was incredible (Jonny took it upon himself to essentially get inside the hurricane-like waterfall’s radius), rainy season had rendered the beauty of it a little less than desirable, and it was mostly just a powerful rush of brown water! We got absolutely soaked seeing this waterfall, and spent the rest of our day trying to dry off.

We jumped back in the shuttle, and in another two hours, we arrived at Lagos de Montebello. The first stop is right on the Guatemalan border, and you get the opportunity to do the classic ‘I’m in two countries at once’ photo. 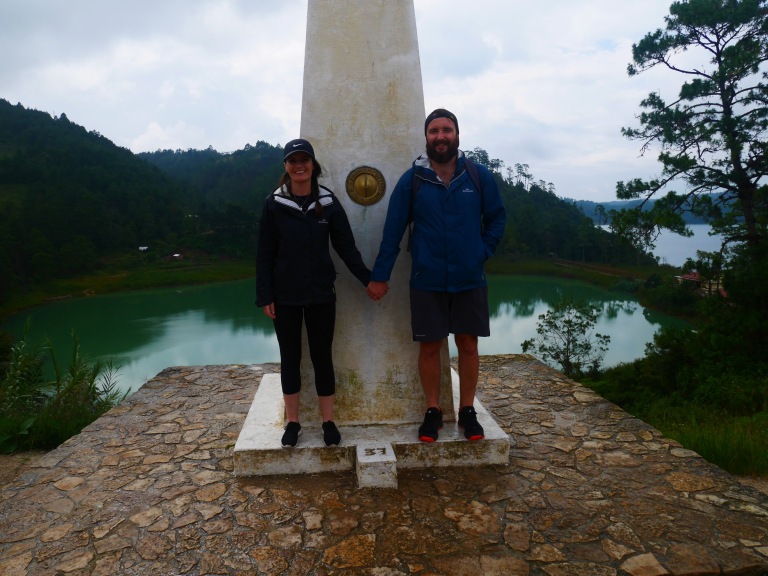 The lakes themselves are stunning, and even though it was overcast, it really didn’t hinder the natural beauty of them. We visited most of the main ones, and some have islands in the middle, which you can raft out to if you are keen. 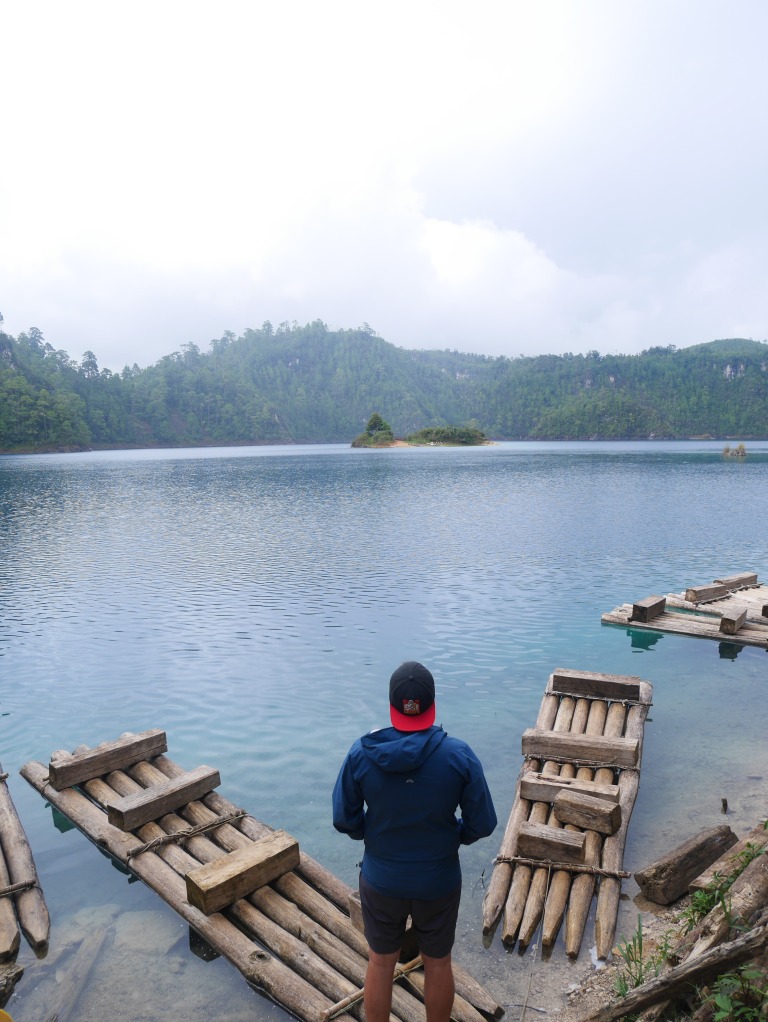 Unfortunately, despite our enthusiasm to go out, the rest of the shuttle was getting a bit cranky about how long the tour had been going, and didn’t want to wait around for us to go out! 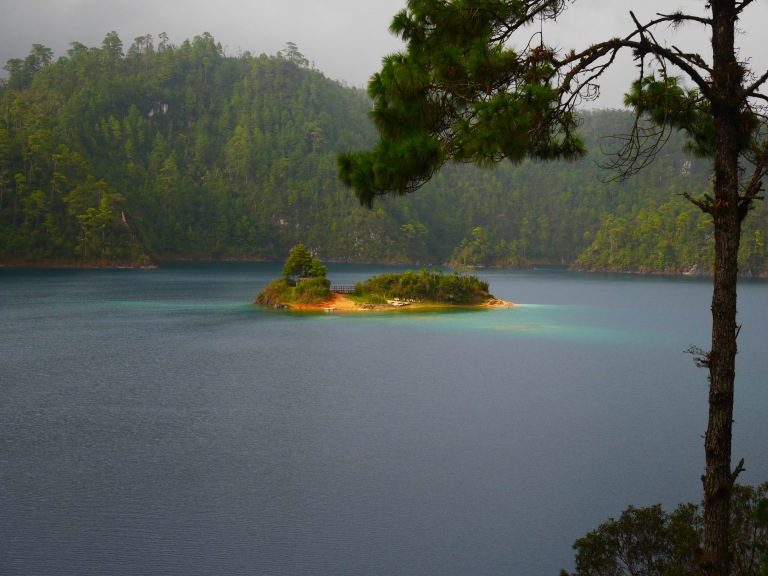 Anyway, we can highly recommend checking out these lakes, but it is probably better done as an overnight trip on the way to Guatemala, as the hours in the shuttle compared to seeing the sights wasn’t great (about 7 hours out of 11 were spent in the shuttle!). The El Chiflon waterfall is a fair way out of the way, but we imagine it is quite the sight in high season!

We really enjoyed San Cristobal, and like we said, it is very easy to see how some travellers would find themselves extending their stay, or hunkering down, as it has everything you could need.

For the sake of comparability, we will state all our costs in USD. The costs below are an approximate total for two of us over four days: